What is the law about cannabis in Amsterdam?

In 1972, the Dutch government divided drugs into more- and less-dangerous categories, with cannabis being in the lesser category. Accordingly, possession of 30 grams or less was made a misdemeanor.

Cannabis has been available for recreational use in coffee shops in The Netherlands since 1976. Cannabis products are only sold openly in certain local “coffeeshops” and possession of up to 5 grams for personal use is decriminalised, however, the police may still confiscate it, which often happens in car checks near the border or at events. Other types of sales and transportation are not permitted, although the general approach toward cannabis is lenient. Note: You’ll see the Amsterdam logo and our registration number on the front door 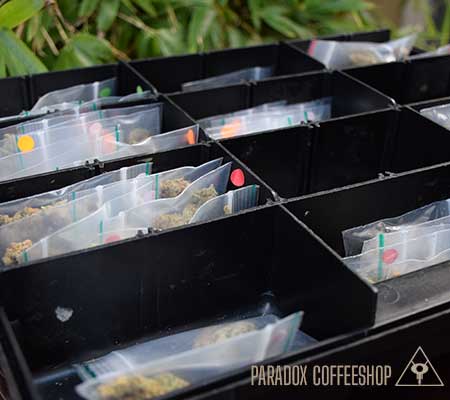 Why Is cannabis Tolerated in AMSTERDAM?

Though retail sales are tolerated, production, transportation, and bulk possession of cannabis outside of retail stores is illegal, preventing testing for contaminants and dosing. After legalization and regulation of the entire supply chain in other countries, some cities in the Netherlands are participating in a pilot project using officially approved growers and testers, and labeling of the amount of THC.

The Dutch Ministry of Justice applies a gedoogbeleid (tolerance policy) with regard to the category of soft drugs: an official set of guidelines telling public prosecutors under which circumstances offenders should not be prosecuted. This is a more official version of a common practice in other European countries wherein law enforcement sets priorities regarding offenses on which it is important enough to spend limited resources. 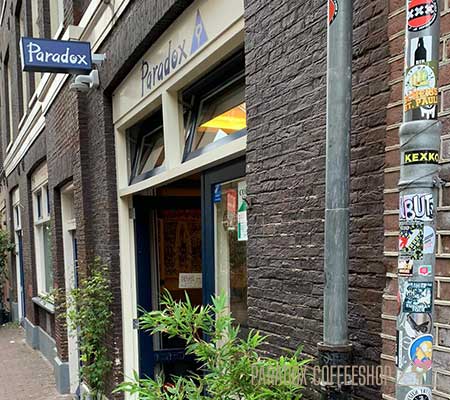 According to current gedoogbeleid the possession of a maximum amount of five grams cannabis for personal use is not prosecuted. Cultivation is treated in a similar way. Cultivation of 5 plants or less is usually not prosecuted when they are renounced by the cultivator

Frequent use of cannabis can often lead to dependence

Paradox Coffeeshop
4.6
Based on 1244 reviews

Barry Connolly
07:08 27 Jul 22
A must visit coffee shop. No nonsense and friendly staff. Not like some cafes which seem gimmicky. Superb products with... variety and would recommend adding to any itinerary. I'd definitely return.Paradox you have set a bench mark. Keep it up.read more

Orfhlaith King
19:20 25 Jul 22
I had read a lot of reviews before going. I didn't eat a lot of the spacecake as per the instructions and on the... servers recommendation, didn't really feel the effects. cake was still really good and staff were lovelyread more

Ryan Gulfa Wijaya
15:12 28 Jun 22
Best Space Cake in Amsterdam. Follow the instruction for my wife did not and paid the price 🙂

Serena Delli Noci
15:39 14 Jun 22
The place is small (due to some renovations I think) but very cosy, the atmosphere is nice and the two ladies super... kind, recommended!read more

Artz Marques
08:04 11 Jun 22
I came here by recommendation of a friend and I’m happy he recommended it. The cake is delicious and has 1g of grass.... The prices apparently went up (I paid €7.5 per slice and it was €7 not long ago), but it’s still worth it.read more

Miss Vaga
21:38 31 May 22
Cute little shop good smoke. I'm a heavy smoker from Canada and the strongest one was great for me, really hit the... spot after a long trip. And not a busy place if you're looking for somewhere chill. And they're very friendly!read more

R S
18:14 01 May 22
biggest upside: the best prices in the surroundings, very nice hash and outdoor-grown for a small price, can definitely... recommend - yet small place, don't chill inside and there is only small variety of strains, most of them well-known -read more

Filipe Montezo
13:54 05 Apr 22
Best space cakes of the city, and probably the world. I'm speachless.But PLEASE follow the instructions. Half a cake... is more than enough. TRUST ME.read more

Cisla Onche
15:29 27 Feb 22
the best space cakes in amsterdam! they taste delicious and are VERY strong (1gr per slice) for only 7€. You might want... to consider eating only half if you're not a regular user though. The staff is also really friendly and will help you if you're not sure about how much you should take.read more

Yevhen Logosha
22:43 11 Dec 21
Part of it was under renovation yet still friendly stuff, good advice and choice of weed. Spacecakes are the business... tooread more

Jordi Clemente Calduch (Linku)
14:19 30 Oct 21
The staff is really kind and the cake is amazing, both in taste and potency

Kev Richardson
22:16 26 Oct 21
The best space cake in Amsterdam; very chill & calm with an open and airy atmosphere. Unlike many of the dark and dank... pot-cafés.read more

Phil Martinez
10:40 31 Aug 21
A must-go when you're in Amsterdam.The owner is very nice and will help you make your choice.

Rob Gilham
23:16 03 Jul 21
More friendly than your average coffee shop and great mix of regulars and visitors. Known for the cake which is really... popularread more

Rik Head
20:43 03 Jul 21
Excellent small shop with a nice choice. Staff are the best. We visited Cheeky Monday on our last night and had to wait... 10 hours before our flight back the next day, safe to say we stayed in here for a good few hours that day.read more

benny
12:47 10 Aug 20
If you want a quiet smoke away from all the English/German dudes in white T-shirts and silly bags; come here. Friendly,... good prices and great weed.read more

Juliette Straet
13:36 31 Jul 20
Amazing space cake. Not expensive and super sensationsCareful, don't do like us and have an entire piece at once, too... strong !read more

Jeff Doll
16:20 25 May 20
This is my 1st stop when arriving from the state's... Quant and relaxing. Not all the glitz and glam which is perfect... for a mellow chill spot. And the music is fantastic along with the menu choices👍👍👍read more

Brooks Quinn
06:37 08 Mar 20
We had a great time here! Met a couple at our table enjoyed some coffee and a smoke. They have a great selection on the... menu as well; as strong or mild as you would like.read more

Gerald Tellez
15:43 01 Mar 20
Am visiting from California and I’ve been to five other coffee shops in the center of Amsterdam and this place is the... absolute best! The Paradox is not pretentious like the other shops this one is chill and pleasant. It goes along way!read more

Ebony Wilson
19:13 02 Jan 20
Absolutely brilliant service and great atmosphere! Their pound cake is fantastic and very strong. Paradox made my time... in Amsterdam so much fun 🙂read more
Next Reviews